While the Oceanus is making its way to the inner shelf study area, the science party of the R/V Sally Ride have been furiously loading and readying gear in San Diego for departure on Thursday. The sun has hiding behind fairly thick clouds for the last two days which has certainly made it easier for loading and everyone is very excited about departure!

Readying the ship means loading all of the gear required for 42 moorings which have been programmed to sample the water column from 20m to 50m depths measuring velocity, density and turbulent mixing. In addition to deploying moorings, the 18 members of the science party on the Ride are setting up underway equipment including an ADCP (acoustic doppler current profiler, capable of measuring velocity at the very near surface) on an over-the-side pole, a bow chain (string of instruments that hangs off of the bow of the ship away from any contamination due to the ship wake) and an underway profiler at the stern of the ship capable of measuring turbulent mixing as well as density in the water column. Additionally, the science party is installing an instrument to visualize the internal wave features below the surface using a Biosonics transducer mounted in the middle of the ship, and the WAMOS wave radar system is being set up to quantify surface wave properties. As with the Oceanus, researchers from UW have sent an infrared camera which will be mounted on the bow of the ship to observe near-surface temperature fronts. 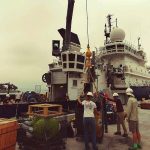 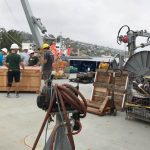 Near-continuous loading of equipment onto the back deck of the R/V Sally Ride. Photo: MacKinnon 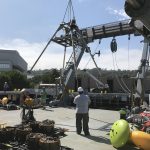 Craning the NRL quadpod onto the back deck of the R/V Sally Ride. In the foreground are the floatation for the moorings (yellow & orange ellipses) and anchors (brown stacks with chain). Photo: MacKinnon 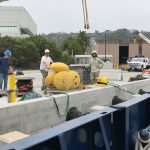 Waiting to crane a box of yellow floats onto the R/V Sally Ride which will be used in several of the 23 moorings deployed over the next week. Photo: MacKinnon 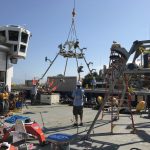 Another view of the NRL quadpod lander. Photo: Colosi 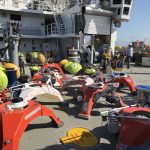 This is what it takes to deploy 42 moorings: sea spiders, floats, anchors, line, instruments and a motley crew of engineers and scientists! Photo: Colosi