Welcome to the Innershelf DRI site

Welcome to the ONR Innershelf DRI site.  This ONR Directed Research Initiative is a collaboration amongst PIs  (people) from a number of institutions.   We will be hosting news, planning information, and data at this site.

Since the first Intensive Operations Period (IOP 1) in September/2017, results from the different groups have been coming together to reveal a complicated plot around Pt. Sal, with lots of topographic wakes, recirculation south of the point, ridiculously sharp fronts and some really aggressive high-frequency internal waves.

Between about noon on the 12th until 9 am on the 13th, we tagged along the other vessels, repeating an L-shaped track in between the Sally Ride and the Sounder. The collective goal of our Inner Shelf Armada was to observe the flow around the cape and try to understand, among other things, how vorticity is produced by the separating tidal flow and how a background, subtidal along-shelf flow might influence this process. 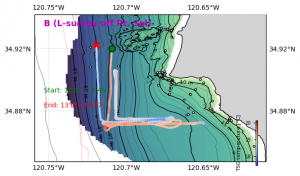 We crossed what looks like some high-frequency internal wave packets, visible in temperature, velocity and acoustic backscatter. A very sharp front (an internal bore?) with ~2 C change across just two neighboring uCTD profiles was encountered next, with a step-like signature also in the deep chlorophyll maximum and ADCP backscatter. There was a persistent, generally southward larger-scale flow for the entire survey, which lasted for almost a complete tidal cycle.

We had business in the Oceano Array and had to leave early on the second day of surveying, but hopefully by stitching the measurements above together with those from the other 5 vessels (see here, here, here and here) we will learn something about the phenomenology of sharp fronts, headland eddies and incoming high-frequency internal waves around Pt. Sal.

A tale of two drifters

We have recovered all of our (SIO, Feddersen) instruments, and the fun of sorting out and QCing the data has begun, however, I thought I’d share a sweet tale of loss and love. We were fortunate to only leave 2 instruments at Pt Sal, drifter 23 and 24, although I do believe their fate may have always been intertwined. Their tale begins during experiment preparation during final drifter assembly, when drifters were being labeled with a sharpie: 1… 27 – then 23 and 24 were shipped to Pt Sal, right next to each other in a large box. During IOP-1, both 23 and 24 rose to the occasion and provided excellent data from which internal waves, fronts, and surface waves were observed. However, on the final day of IOP-1, Sept. 17, drifter 23 (red in the figure) decided he/she wasn’t long for this world and sacrificed itself (for science, I presume) on the rocks, either that or that the point (0,0) in Pt Sal (x,y) is some sort of worm hole? (actually, we checked some mooring lines, which were kelp free! delaying recovery of 23). Regardless, we had finally lost a drifter, much to everyones dismay (delight?).

Now drifter 24 was sad, however, he/she performed admirably throughout IOP-2 collecting much data. On the final day of IOP-2 (Oct. 14), about 1 month after losing drifter 23, 24 decided enough was enough and attempted to reunite with 23. Upon release at 8:05, 24 went directly shoreward (green in figure), hitting the surfzone at 12:39. Realizing that 23 was 1 km to the south, 24 stumbled down the beach for 4 hours, getting about 200 m from 23’s final resting place. At this point, after stumbling down the beach for 4 hours (a difficult task for an old drifter from the 80s), 24 needed a rest. After a long 24 hour nap, drifter 24 made tje final push south toward 23, coming to rest about 100 m from his partner in science. Although we mourn the loss of these two drifters, we are happy they are once again together enjoying their retirement on a beautiful coastline. (in the figure, contours are at 2.5 m intervals, and the 20 m contour is thick)

There and back again

That’s a wrap for us out here. Gear in hand, deck overflowing, data download party in full swing, we’re headed home.  Till next time….

All work and no play makes...

We’ve been mostly working crazy hours out here, pulling in a silly number of moorings, downloading hundreds of GB of data, dealing with a few unexpected twists and turns. But we took a couple minutes on the 31st for sanity-retaining-fun:

Winning entry – the OSU ADCP team! Look closely in other photos for their serial numbers and hard-hat transducers

ADCPs at work on deck

Our ever serious chief sci

Thanks to our awesome cook Mark for getting pumpkins for everyone

Even our “pull em up, cross em off” board got festive

Just another day in the office with Kerry

You take one down, pass it around, 99 moorings left to recover...

Actually far fewer than 99, only 15 more to go as of Thursday morning. We have had an incredibly busy few days, with a few unexpected challenges.  As of now, we have most of the moorings onboard and  tons of data being downloaded.  A huge shout-out to the SIO research divers, who came out to lend us a hand.

Some unexpected twists and turns

Weather has been incredibly good

Our octopus count has been skyrocketing. The winner so far is VB50S-A, which had 5(!) surprised octopi crawling out of every nook and cranny upon recovery